I apologies for the lack of blogging in the past few months I've been hampered with college work and unfortunately in and out of hospital more times than I would have wished for. However in my last blog post I did promise a very exciting post was on the way. So at the end of January NUIG's business society holds there annual Commerce Ball, it's a massive attraction for all the college students no matter what area of study. As I am a committee member it was a big night for all of our team as a lot of hard work and dedication is put into the event. The night was a huge success as all the hard work finally paid off. It was hugely rewarding for the committee members to hear such positive from students after the even. As you can only imagine the night was very entertaining and great craic was had, I found it difficult to find time to get some quality pictures taken as so many deadlines had to be met; I'll remember to improve on my time management for events to come! I put together a few pictures never the less from the event just to give you an idea of what my friends and I wore.

The dress I wore was from Topshop, initially I had planned to get a vintage dress for the ball but when tried this on in I fell in love with it and decided it was the dress. Unfortunately I don't think I've any picture of my clutch, I purchased it in Accessorize, however I'm in love with it so I'm sure you'll get the chance to see it in blog posts to come. The earrings I'm wearing I picked up in A-wear the day before the ball (all ways last minute!!) and the bracelet was on loan from my Mam for the night! :)

Each year at the ball there is a headline act this year Rudimental took center stage, they went down a treat and were much appreciated by all that attended. Thankfully I was lucky enough to meet the band members, sadly I had more pictures but I have since lost my phone which they were all on. This is one which I took from my Instagram it was so cool to meet all the band members they were all so welcoming and were up for having the crack with everyone, they later went down to meet all the students and even took time to get in pictures and have drinks with them which was so cool of them! 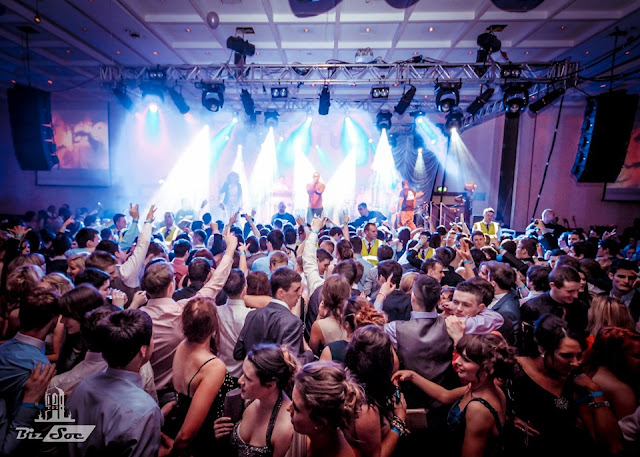 These are just some pictures complements of the Bizsoc Facebook page, they'll help to give you an idea of how big and successful they night was!
Hope you enjoyed this post I know it was well over due but it's finally here.
Plenty more posts to come feel free to leave any thoughtful comments or follow my page. I've also joined Google Plus so if your enjoying my posts please feel free to share them through this network!!
Thanks for the support so far!! :)

Until next time,
Alice xo
Posted by Alice Doran at 13:02

Alice Doran
Hi I'm Alice, I'm 20 years old and a studying Commerce in NUI Galway. I'm only new to the blogging world so feel free to leave comments and advice, everything is greatly appreciated. If you have time please view my complete blog. Hope you enjoy feel free to contact me at naughtyalicexo@gmail.com .Thanks for your time. xo